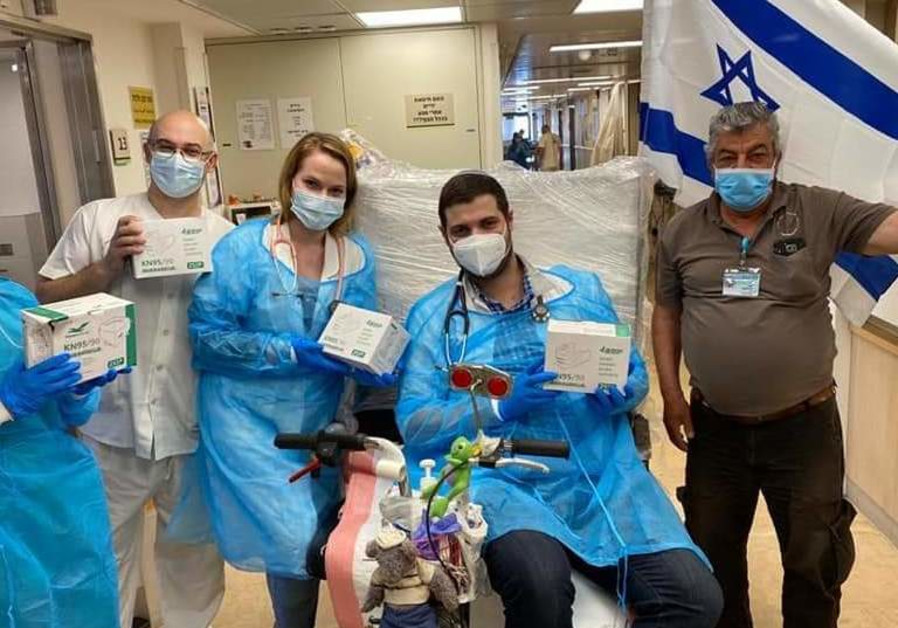 When coronavirus made its way to Israel, a group bought 10,000 N-95 masks and 25,000 paper masks, found space on a medical supply plane and had them shipped to Israel.

Shirley Burdick has shown dozens of Chinese Christians what she calls the “real” Israel. Born and raised in Shanghai, she founded the organization Ten Gentiles, a nonprofit that aims to “equip and engage Christians to participate in God’s restoration of Israel alongside the Jewish people,” according to its website.Burdick often brings Chinese Christian groups to Mizmor Ledavid, an Orthodox synagogue in Jerusalem for Friday night services. She also arranges for them to be hosted for Shabbat dinner by members of the synagogue. “They feel an attachment to Israel but don’t know what it is,” she said, about the Chinese tourists. “Some of them come several times a year for all the Jewish holidays. When I took them to synagogue some of them started crying.”When coronavirus made its way to Israel, these frequent visitors decided they wanted to help. So they bought 10,000 N-95 masks and 25,000 paper masks, found space on a medical supply plane and had them shipped to Israel.Burdick says there was some complication at the airport, as another donor had donated masks to the city of Ashdod, and many of her N-95 masks got mixed up with that shipment. The deputy mayor of Ashdod says they’ve all been given out, although won’t give details.But Burdick still had thousands of masks to give out.Some went to Ma’aynei Hayeshua Medical Center, the ultra-Orthodox hospital in Bnai Brak. Others to the urgent care facility Terem in Jerusalem, others to a nursing home.“They put the labels of the Chinese flag and the Israeli flag (on the boxes),” Burdick said. “It’s wonderful to deliver love from Chinese Christians to Israeli society. It is something new that Christians are coming to help the Jewish people.”Many of the donors belong to Protestant churches.“In the beginning of the coronavirus outbreak, every city in China was desperate for face masks, and people were very worried,” Joshua, who raised much of the money for the donation, said in an email. “Many countries, both government and non-government organizations, and individuals lend helping hands to China. And we saw Jewish brethren praying for us at the Kotel; we were deeply moved. We are very grateful!”His wife, Sarah, said they feel empathy with Israelis suffering from corona.“When the coronavirus broke out in Israel, we knew that Israel was going through what we already went through. Proverbs 3:27 says, ‘Do not withhold good from those to whom it is due, when it is in your power to act.’ We want to do everything we can to help our Jewish brothers and sisters to overcome the difficulties.”Burdick is not the only one providing health care workers with masks. Miriam Lottner, a senior content developer at Microsoft. As a side business, she designs toys that encourage STEM. She manufactures in china so has connections there.On her Facebook feed she saw post after post by health care workers, lamenting the shortage of masks and other personal protective equipment. Doctors and nurses were being given one mask per day, meaning they could potentially be transferring corona between patients.Her bosses at Microsoft let her use her volunteer days and she quickly had a total of $30,000 in donations within a week. She bought 27,000 N-95 masks that went to hospitals all over Israel. It was not an easy task.“When you manufacture in Chine you don’t work directly with factories but with agents,” she said. “There was a lot of theft. For example, the Chinese mafia stole 2000 masks at the Shanghai airport.”Then China changed the export regulations, leaving some masks stuck in the country, although they did eventually arrive.She said the health workers were very happy to receive the masks.“The minute the masks got to hospitals they were put to use,” she said. “People sent us pictures wearing the masks.” sign up to our newsletter