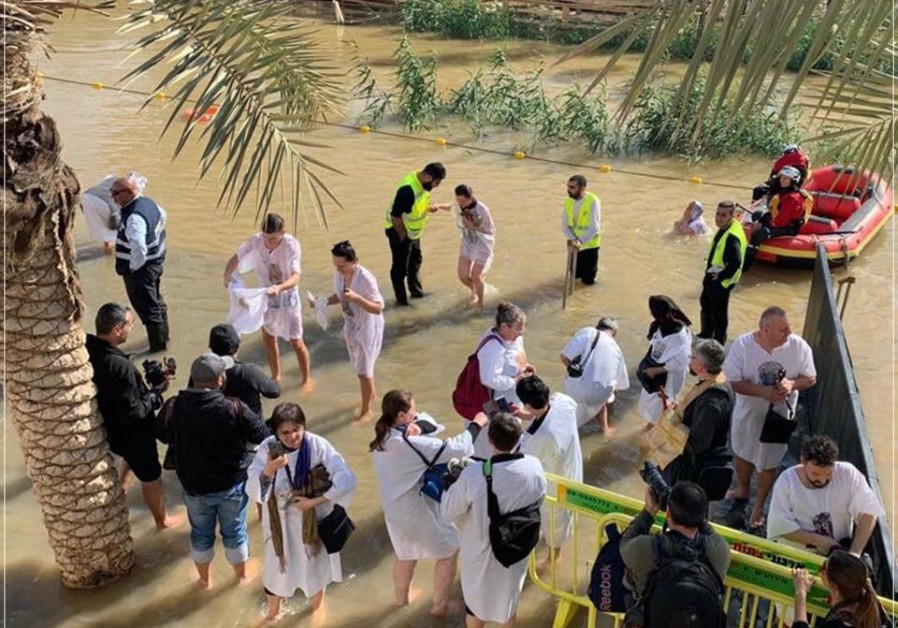 The Greek Orthodox patriarch arrived on Friday at the “Qasr el Yahud” baptism site on the Jordan River, just east of the city of Jericho, in order to lead the ceremony for the Epiphany holiday. Thousands of Christian pilgrims, from Israel and the territories and from around the world, took part in the traditional ceremony. In Orthodox Christianity, the Epiphany is celebrated according to the Julian calendar, thus at a later date than in Catholic or Protestant Christianity.

Celebration of the Epiphany at Qasr el Yahud by the Jordan River, Friday January 18 2019 / Courtesy
The ceremony was coordinated in advance with the help of the Civil Administration of the Coordinator of Government Activities in the Territories (COGAT), the latter being the branch of Israel's Defense Ministry implementing Israeli policies in the West Bank.

Celebration of the Epiphany at Qasr el Yahud by the Jordan River, Friday January 18 2019 / Courtesy“As we do every year, we prepared ahead of the arrival of thousands of visitors at this unique site, with the goal of promoting the freedom of religion and ritual for all of the different branches of Christianity over the winter holidays,” said Lieutentant Colonel Eran Gross, head of the Coordination and Liason office in Jericho. “We wish you all a happy holiday, and we will see you again next year.”

Greek Orthodox Patriarch Theophilos III at the celebration of the Epiphany at Qasr el Yahud, Friday January 18 2019 / Courtesy
“Qasr el Yahud” is considered to be the site where Jesus was baptized. The site was captured by Israel in the 1967 Six-Day War, after which the Israelis mined the surrounding area to counter the threat of enemy tanks rolling back into the West Bank, and closed the site off to tourists. Israel reopened Qasr el Yahud in 2011, but the road leading to the site was bordered on either side by minefields. In March of last year, Israel announced that it would be completely clearing the surrounding area of mines in a project being carried out by Israel’s National Mine Action Authority under the direction of the Defense Ministry, together with HALO Trust, an international mine-clearance charity. The project was set to take about one year to complete.
Anna Ahronheim contributed to this report.
sign up to our newsletter

How to Stay Motivated In School by Brian Tracy!

CAESAR’S DUE by Bishop Dag Heward-Mills