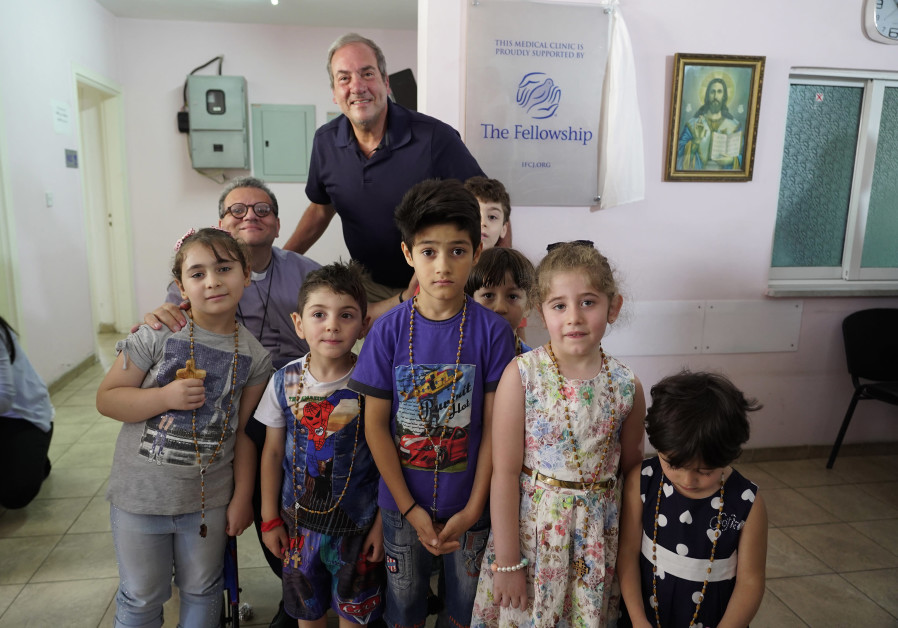 As Christians in the Middle East risk death for practicing their faith, the IFJC is doing what it can to keep them safe.

In the Book of Psalms, the Bible states, “Rescue the weak and the needy; deliver them from the hand of the wicked.”There is perhaps no better description of the plight Christians are suffering in today’s Middle East. From Syria to Sudan, Christians are slaughtered for being the other. According to the human rights organization Open Doors, some 215 million Christians are currently facing persecution, with some suffering the worst fate: death. International Fellowship of Christians and Jews (IFCJ) founder, Rabbi Yechiel Eckstein, has seen the anguish this has caused those who flee dangerous countries firsthand. In Jordan, the organization has recently opened a clinic to treat refugees from Iraq and also provides some 100 families with food, rent and medicine.Protecting religious liberty is an important facet of IFCJ’s work since its inception 35 years ago. However, the largest philanthropic organization in Israel has been largely known for its help protecting Jews in dire circumstances, especially from Ethiopia and the former Soviet Union. However, with its “Rescue the Persecuted” campaign, the organization has expanded its mission to help their Christian brothers and sisters.“What is not as known is our involvement in helping persecuted Christians. We’ve helped the Coptic community in Egypt, where a church was just bombed and another incident, where children were pulled from buses and killed just for being Christian,” Eckstein lamented, adding the organization also helps 100 Druze families who escaped to Jordan from Syria.For the refugees, their struggles are far from over once they reach Jordan. Because they aren’t officially recognized as refugees by the UN Human Rights Commission yet, they are in a difficult limbo period where they cannot go home, but they cannot work or comfortably settle in their new country either.While they wait for resettlement – most have already been waiting for up to two years – IFCJ works to ease despair in a tense time.As such, IFCJ is waging a two-part battle on their behalf. The first is the new clinic, which provides much-needed healthcare for the refugees, and secondly, the organization is working closely with the Trump administration to speed up the refugee recognition process.IFCJ raised $250,000 last year to build the clinic, and its campaign, which ran throughout July, raised an additional $400,000. The goal is to raise $4-5 million annually to meet the refugees’ needs.For most Jews from the Middle East or North Africa, the story of persecuted Christians in the Middle East sounds sadly familiar.“Like the Jewish communities across the Middle East and North Africa, there were Christian communities in these places for 2,000 years, and now they’ve been essentially wiped out,” Eckstein said.Eckstein credits the new administration for taking this issue seriously, especially US Vice President Mike Pence.But entering the Middle East is not easy from a logistical or security standpoint.“The problem is nobody knows how to effectively help,” Eckstein said, explaining that in the early stages of the campaign, it was difficult figuring out how to ensure money goes into the right hands, and not lining the pockets of would-be terrorists.Eckstein is adamant, though, that navigating these cumbersome logistics is the least the organization can do for such a worthy cause.“This is the right thing to do,” Eckstein said. “Apart from the morality issue, as an organization that works closely with Christians, we need to help them when they have need.”The stories Eckstein heard while visiting the clinic were harrowing. From meeting a young 16-year-old boy who was scarred for life after being burned with hot oil and set on fire by ISIS, to a man buried alive by the terrorist organization and rescued three days later after no water or food, most tales of woe have one common denominator: the desire to not give up.As a man of hope who sees the flicker of light in a dark room, Eckstein is optimistic their assistance will give the refugees a springboard to restart their lives and leave the darkness behind.“We can’t save them from ISIS. We can’t save them from terrorism – that can happen anywhere. But what we can do is give them the basic tools to lead their lives in Jordan and try to give them a way to be resettled in the West,” he said.sign up to our newsletter

One Day Jesus Will Return