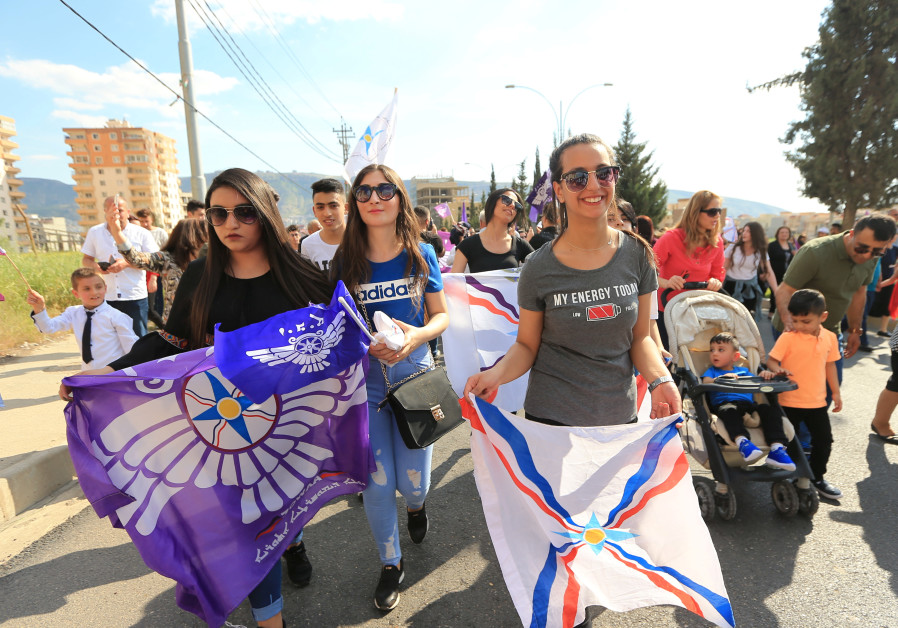 The Easter holiday and Palm Sunday celebrations across Nineveh and in Mosul and Duhok seem to show a drive for reconstruction and energy being put in to the post-ISIS future.

Thousands of Christians celebrated the Assyrian New Year in northern Iraq over the last several days. The celebrations coincided with Easter and brought together groups of Assyrian Christian activists who are seeking to rekindle the flame of their community from the ravages of ISIS.The Easter Mass at the Saint Mary’s Assyrian Church of the East was attended by hundreds of worshipers on Saturday, the same day on which Juliana Taimoorazy, the founder and president of the Iraqi Christian Relief Council and co-founder of a project called “Rise Nineveh,” led members of her group to Mosul to stand on the ruins of Nineveh. The ancient city and the area around it hold special significance, says Taimoorazy.“There is a lot of meaning to ‘Rise Nineveh.’ It reminds of us Jonah [of the Bible] and Abraham, the father of the three religions. He was the first person who worshiped the one and almighty God.”She says that the recent wars in Iraq have left behind destruction but that Jews, Christians and Muslims are bound together through Abraham, who was from the ancient city of Ur in what is now Iraq. The Assyrian Empire once ruled over the areas around Mosul and prophets such as Jonah, Nahum and Daniel played a pivotal role in the spiritual landscape of this region.This is Taimoorazy’s second visit to Iraq. On this trip she met with Dr. Faisal Jeber of the Gilgamesh Center for Antiquities and Heritage Preservation to discuss how best to celebrate the New Year and Easter season. She wanted to do something that would connect the events with new archeological findings below the tomb of Jonah in Nineveh. Jeber has been instrumental in reconstruction work and says that returning ancient symbols such as the Lamassu, or Assyrian protective deity that has a head of a man and the winged body of a bull, is essential to reviving post-ISIS Mosul.TAIMOORAZY ENVISIONED flying 6,768 lanterns over the ruins of the ancient city of Nineveh, one for each year of the Assyrian calendar; eventually that was scaled down to 1,000 lanterns. And her group pulled off this difficult journey to Mosul, not far from where ISIS sleeper cells still operate, to usher in the New Year. She says it was filled with “hope and healing for all of Iraq, especially for us Assyrians.”Taimoorazy and other Assyrians are seeking more autonomy in Iraq now that ISIS has been largely defeated there. During the war, ISIS expelled the Christians of the Nineveh plains and they fled to the Kurdish region. Many made plans to go abroad. However, she says that self-rule and autonomy, along with protection from local forces such as the Nineveh Plains Protection Units (NPU) will help the community revive – and the NPU agrees. On March 25 they posted a video of thousands of people gathered in the town of Qaraqosh (Bakhdida) to celebrate Palm Sunday under the NPU’s watchful gaze and trustworthy AK-47s.The turnout for Easter celebrations, particularly in the city of Duhok, included hundreds of local Christians as well as participants from around the world. Taimoorazy says there is increased awareness in the Assyrian diaspora for reconnecting with the land. There is even a group called Gishru which she compares to Birthright that is bringing people to Iraq to see the history and reconnect with locals. She sees the renewed activity among Christians in Iraq as a sign of better things to come.“People are sick and tired of business as usual. This is the same across Iraq, among Kurds and Arabs I met. They want to see revival. They want new blood.”Iraq is facing elections in May and Christians will compete for several reserved seats in parliament. Her greatest fear is that the Assyrian Christian minority will become an artifact in a museum rather than a thriving and living community.“I don’t want the world on the sidelines watching us become extinct. As I was walking and looking at children’s faces and elderly people I saw a community that wants to live and breathe and excel.”She also seeks to appeal across the numerous denomination lines of Christians in Iraq including Chaldeans, Syriacs and Assyrians. For that she is thankful to organizations like the Philos Project that have shown support for her work, connecting Christian communities in the West with those in the Middle East.The Easter holiday and Palm Sunday celebrations across Nineveh and in Mosul and Duhok seem to show a drive for reconstruction and energy being put in to the post-ISIS future. There is a lot of uncertainty about how reconstruction will proceed in Mosul and about the different armed groups in Nineveh plains and the threat of terrorism. But over the last weekend that was pushed aside for dancing, revelry and celebration.
sign up to our newsletter

#SheInspires with Dr Naomi Adjepong Live on the #IMDrive with JJD

Some Health Benefits of Garlic!