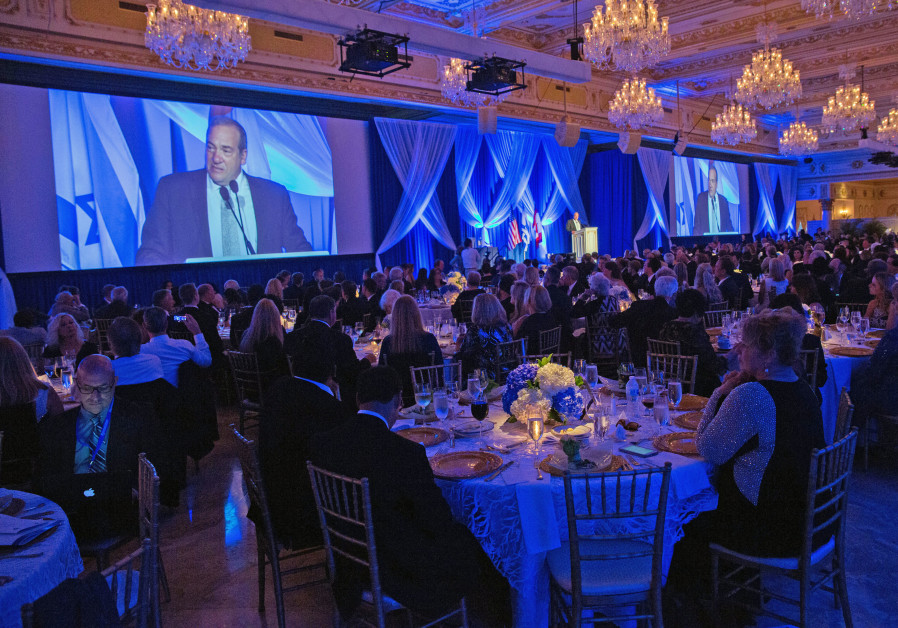 The Fellowship House is designed to be a home away from home for Christians visiting the Holy Land.

As anyone who’s traveled via Ben-Gurion Airport can attest, International Fellowship of Christian and Jews Founder and President Rabbi Yechiel Eckstein is a notable presence when embarking on and off the plane, as images of him and his organization adorn the gate’s walls.In the United States, Eckstein is also a mainstay in Christian television programming. For the past 35 years, those marketing campaigns have been successful in getting the word out to the 1.6 million Christian donors around the world, making The Fellowship the largest philanthropic organization in Israel. Last Sunday night, however, marked a dramatic departure in approach for the organization, as it held a star-studded gala event at President Donald Trump’s Mar-a-Lago resort in Florida. The event, to raise funds for needy Jews in the former Soviet Union, went off without a hitch, with remarks made by Ambassador to the UN Danny Danon, former Canadian prime minister Stephen Harper, and even Trump himself (who delivered a pre-taped statement).“It’s a great honor to have everybody at Mar-a-Lago, a special place for a special group of people,” Trump told the gathering via a video, which he made at the Florida resort just before The Fellowship’s gala, as he headed back to Washington.More than 500 evangelical Christians and Jews gathered to celebrate 70 years of Israel and the 35th anniversary of The Fellowship, which aims to bring Christians and Jews closer together for the greater good of the Jewish people and the State of Israel.“Christians and Jews united tonight in a powerful demonstration of love and support for Israel and the Jewish people,” Eckstein said in a statement. “We celebrated more than three decades of partnership and paid tribute to the brave US decision to recognize Jerusalem as Israel’s eternal capital.”“It’s a different technique for us,” he acknowledged when speaking to The Jerusalem Post after the Together In Fellowship gala. “We work mainly through direct response – television, direct mail, etc. This was our first gala event for fund-raising and also expanding our horizons to include Jewish people more.”WHILE THE BULK of The Fellowship’s gifts come from Christian donors, the gala aimed to bring Jews into the fold for several reasons, Eckstein explained.The first is to demonstrate to Christian donors that Jews stand shoulder to shoulder with them in the mission to help struggling Jews – whether in the FSU or Holocaust survivors in Israel.“Some Christians started asking, ‘Don’t Jews care about elderly Holocaust survivors who need food in the FSU? And that was embarrassing,” Eckstein said.The second purpose is to help reinforce Jewish identity in the Diaspora, something that Eckstein fears is on the decline.“The needs are much greater than what traditional institutions are able to give. Federations are not addressing these issues today to the extent that they ought to. We’ve been plugging in all of these holes. The bottom line is that this is really a new method of fund-raising and Jewish identification,” he said.Eckstein lamented the downward trend of Jewish giving to traditional institutions like Federations.“I remember in the ‘60s and ‘70s the Federations would say, ‘We are all one.’ But nobody gives a damn anymore about elderly Jews in the former Soviet Union who are sitting in squalor,” he said. “Giving is down, not just among young people, but across the board. So what you essentially have is a few large foundations – wealthy family foundations – giving the bulk of the Jewish funds. It’s not just young Jews alienated from Israel, they are alienated from Jewish life. It’s a serious problem.”On a more upbeat note, at the gala Eckstein announced the opening of The Fellowship’s new $60 million headquarters in Jerusalem, which is being built adjacent to the new US Embassy.The Fellowship House is designed to be a home away from home for Christians visiting the Holy Land.“There was a need as we grew to buy a space that would be our global headquarters, but more than that, we wanted to build an international Christian visitors center,” he said. “There’s roughly 1.5 million pilgrims who come to Israel annually. They tend to be pro-Israel, they love to walk where Jesus walked and in the land of the Bible, and they see Israel for the true democracy that it is.”But when these visitors go back home, “they’re lost” as potential advocates, he added.So the headquarters will become – figuratively speaking – a visitor’s center on steroids, a unique place that Christians can call a home, where they will be “trained to be ambassadors” of Israel and will go back home armed with a plethora of information to combat the Boycott, Divestment and Sanctions movement, recruit others to come on trips to Israel and speak out for Israel.“We hope this will deepen the bonds with Israel and the Jewish people to send them back as representatives of Israel and the Fellowship,” he said.

This article was written in cooperation with the International Fellowship of Christians and Jews.sign up to our newsletter